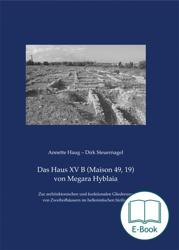 E-book 43.9 MB
The house XV B (also known as maison 49,19) in Megara Hyblaia, an antique small town nearby Syracuse, is one of the biggest housing complexes of Hellenistic Sicily. Spread around two courts, the house from the 3rd century B.C. possesses a great many of generously cut >main rooms<, but at the same time areas with installations for productive activities. Thereby it belongs to one of the especially interesting Hellenistic domestic architectures - under social as well as under culture-historic aspects. This makes the already in the 1960s excavated, but since then unpublished house, a rewarding object for a historical-archeological analysis.
The example of the house XV B allows an examination of some basic problems of Hellenistic housing. The new analysis provides important insights for the development of a large two-courtyard-house in connection to and dependence on an already existing insula-system of the pre-Hellenistic city. The differentiation of two main building phases permits conclusions to a changing understanding of representative living. Such concepts are especially being demonstrated through paths within the house, the accessibility of rooms, their function(s) and cultural semantic.
A detailed analysis of the building structures of the house XV B constitutes the starting point for a discussion of comprehensive questions of Hellenistic domestic architecture, which includes other examples predominantly from Sicily. The analysis is focused on the relation of the ground plan to the urban structure, the conception of two-courtyard-houses and especially on the function of rooms and areas of the house. Earlier interpretations, which were partly guided by the description of the ´Greek house´ by Vitruv, have emphasized the spatial separation of certain usages of two-courtyard-houses (e.g. gender-related or in the sense of a differentiation between >private< and >public< sphere). However, a more critic revision of the archaeological record leads to a less strict differentiation: House areas, which are designed differently, are not necessarily determined in respect to their functions, but stimulate different atmospheres and thus shape social manners.
Finally the case of the house XV B of Megara Hyblaia is placed in its historic context – a rural city under the influence of the metropolis Syracuse – and into the context of a discussion of methods about possibilities and limits of a reconstruction of antique usages of domestic architecture.