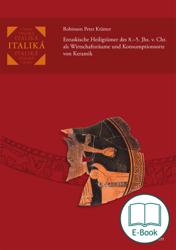 E-book 30.7 MB
While many aspects of Etruscan religion are intensively discussed and studied through current conferences, publications and fieldwork, general research and an overview of the socio-political and economic significance of the religious sphere in Etruscan society is still lacking. This volume examines the economic roles and functions of sanctuaries, as well as their pottery assemblages and vase inscriptions, in the Etruscan heartland during the 8th–5th cent. BCE. The investigation of the Etruscan sacred economy is performed on the basis of three main research questions: the reconstruction of pottery consumption patterns, the identification of production and crafts embedded into sacred contexts, and finally the analysis of the Etruscan sacred landscape as an indicator of socio-political structures and processes.
Although religion is a current and intensively discussed topic in Etruscan and Italic studies, there is still a need for detailed analyses of its economic significance and about a sacred economy in ‘Pre-Roman’ Italy. This volume analyzes Etruscan sanctuaries of the 8th–5th cent. BCE systematically as economic spaces. The specific area under investigation is the Etruscan core region between the rivers Arno and Tiber, the data set consists of 51 sacred contexts with statistically accessible pottery findings, and 334 pottery inscriptions. The investigation of the Etruscan sacred economy is performed on the basis of three main research questions:
(1) Pottery as consumption goods. The distribution and functions of vase forms and classes as well as activities and ritual practices in sacred contexts are reconstructed using statistical analyses of pottery. Additionally, this chapter traces chronological developments and consumption patterns, and examines the fundamental differences in pottery consumption between southern and northern Etruria. Other topics include the functions of ‘ritual vessels’, such as miniature vases, kernoi or thymiateria, and of depictions of altars and ritual scenes on Etruscan pottery. Finally, the role of Greek imported pottery in Etruscan sanctuaries, particularly with regards to vessel forms and imagery, is discussed in this chapter.
(2) Production and crafts. Pottery, metal processing and textile production in sanctuary contexts are systematically examined in terms of the Etruscan sacred economy. The main research questions deal with forms of organization for craft activities embedded in sacred places, as well as the significance of those crafts for the sanctuaries and the Etruscan economy as a whole. Another topic is the role of writing and literacy in Etruscan sanctuaries, such as the mechanics of writing spaces (scriptoria) or the processes for creating votive texts. Finally, this chapter discusses the significance of Etruscan sanctuaries as institutions responsible for standardized and calibrated weight systems, and locations of official weights (ponderaria).
(3) The development and political economy of the Etruscan sacred landscape. This chapter analyzes representative indicators of the Etruscan sacred landscape in order to reconstruct socio-political structures and processes. These indicators include, for example, the lifespans of sanctuaries, as well as sacred architecture, pottery and pottery inscriptions, and the names of clans and gentes contained in votive texts. On this basis, the author suggests a supraregional model with five main phases of socio-political significance for the religious sphere and sanctuaries in Etruscan society.
The results of these three main research questions provide a general picture of the Etruscan sacred economy during the 8th–5th cent. BCE, with a wide range of ritual practices, consumption patterns and mechanisms, craft activities and socio-political processes.
Robinson Peter Krämer, born in 1986, studied Classical Archaeology, Ancient History and Prehistory at the universities of Bonn and Antalya and received his Master of Arts degree in 2011. In 2013, he received a PhD scholarship from the German Academic Exchange Service (DAAD), and from 2013 to 2016 he was a doctoral student in the DFG Research Training Group 1878 ‘Archaeology of Pre-Modern Economies’ in Cologne and Bonn. He received his doctorate in 2016 at the University of Bonn with his thesis ‘Etruscan sanctuaries of the 8th–5th cent. BCE as economic spaces and consumptionscapes of pottery’, for which he was awarded the Travel Grant of the German Archaeological Institute (DAI) 2017/2018. Since 2017, he has worked as an assistant professor in the department of Classical Archaeology of the Heinrich Schliemann Institute at the University of Rostock. His research focuses on Etruria and Central Italy during the 8th–5th cent. BCE, and sacred economy and cultural contacts across the Mediterranean during the 7th–6th cent. BCE. In his current postdoctoral research project, he is examining communication strategies and representation practices in public spaces in Greece during the 3rd–1st cent. BCE.